Home »Travel stories »A School for Girls Near Istanbul

As a young teenager, living a mile from a tiny village situated on the vast prairies of central of Canada, I frequently dreamed of visiting big cities in large countries, preferably beyond the farmyard of my parents. I was endlessly thankful for a certain tome on my father’s notorious bookshelf, seven books in all. Within that poignant collection, a compilation of Richard Halliburton’s extensive travel tales, the Complete Book of Marvels, published in 1937, three years before my birth. 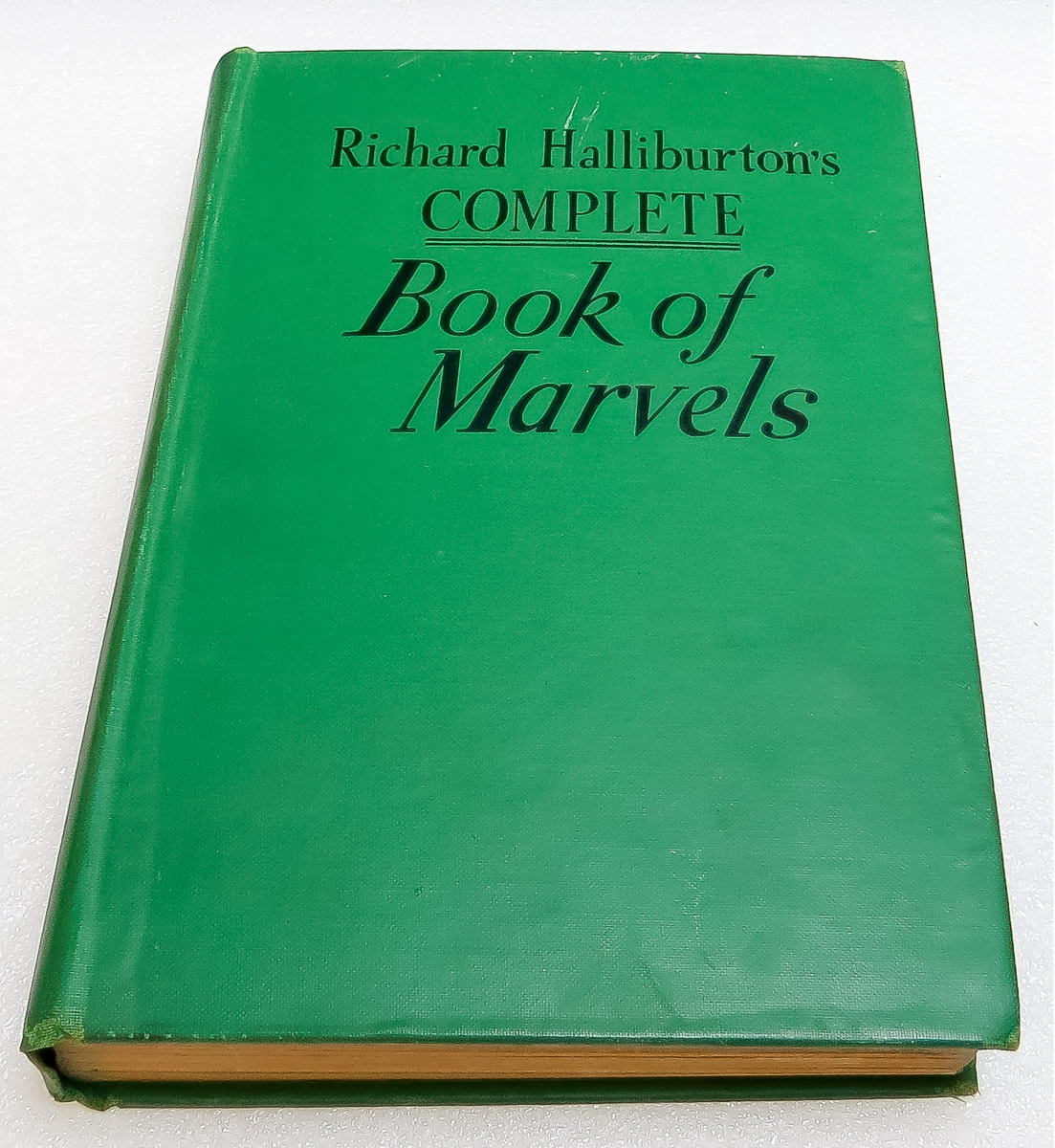 Reading this book gave me two things: historical information and, more importantly to my way of thinking, enthusiasm to go on a quest to discover the world. One of the many places described in the book was the noble mosque, Hagia Sophia, in Istanbul.

Immediately jumping forty years ahead, it is 1994, and I am now in Turkey. I have just endured an insanely endless bus trip from Ephesus in the southwest to Istanbul in the north — a long and arduous journey along bumpy roads, in humid summer heat with no air-conditioning, and with at least a half dozen smokers on board. I have come to this great city to see many things, but mainly Hagia Sofia.

It was nearing sunset, and most of us on the bus still needed to be ferried from the Asian side of Turkey to the European side across the Bosphorus Strait, which connects the Black Sea with the Aegean Sea. A much smaller body of water, the Sea of Marmara, intervenes, creating the beautiful coastline surrounding European Istanbul known as the Golden Horn.

Eventually loaded onto the ferry, we sailed westward, a short half hour across the Strait. Along with a few presumably local people, I watched from the upper deck as we neared the magnificent Golden Horn — a scene straight out of an Arabian night, with its forest of tall, thin minarets stretching upward in the ghostly dusk and directly into an inky black sky. I was thrilled to be here, in the big magical middle of both Asia and Europe.

Over on the right, an unusually enormous chateau-like structure, twinkling with what seemed like one thousand lights, stood out from a high hilltop. Two young gentlemen standing next to me were watching with equal enthusiasm as the shoreline approached. “Excuse me, are you from here?” I wanted to know.

“Yes,” the one next to me said. “I live in Istanbul. I am a student of sculpting at an art academy connected with the Fine Arts Museum, at the bottom of the Golden Horn, which, as you can see, is visible from here. I have been in Ankara studying, and am at last returning home. I am so happy to see all these familiar sights again.” He seemed eager to tell me about himself, and I was fascinated.

“So, can you tell me what those lights are, way up on the hill to the right?”

With a proud glow on his bronzed face, he said: “Yes, that is beautiful Üsküdar, an upscale residential district of Istanbul’s Asian side. It has attractive tree-lined streets with lovely shops, seaside cafés, and many of the oldest wooden houses from the Ottoman Empire still standing. There are terraced gardens that fall to the edge of the Bosphorus, where one can walk and enjoy the stunning views across the Strait. It’s a beautiful area; my mother is from there. She is Turkish; my father was Armenian.”

I was smiling with delight, thinking how great it would be to take a day trip up there. “And what is that large building, with the many lights, looking almost like a palace?”

“So that large building,” he went on to explain, “is the Çamlyca High School for Girls, the most prestigious and largest school for girls in all of Turkey. Teachers once came from America, in the 1940s and 1950s, to teach English there to daughters of wealthy parents.”

My ears perked up at this bit of information; a long-ago memory was suddenly jolted to the front of my mind. Could this have been the same school where my dear friend Kent had been teaching English in 1956, I wondered silently?

Shifting back in time just for a moment, I knew Kent in the early Sixties when I was still in Canada, living in Winnipeg. At the time, he was the manager of the Winnipeg Symphony Orchestra, and I happened to be dating Kent’s best friend, the first horn player of that orchestra. Many evenings were spent over dinner in Kent’s beautiful home. My attention was consistently drawn toward the creative displays of diverse artwork, which he had amassed from frequent world travels, along with hundreds of books and artifacts accumulated over the years.

On one of his walls hung a cluster of three pencil sketches I was particularly attracted to. Each one seemed to be a town square in a different village, or something similar. Kent explained to me he had asked someone to draw these for him when he was living in Istanbul. One of them, a sketch of a cobbled alley leading to the entrance of a sophisticated building, he pointed out was the front entrance of the girls’ school where he taught. He told me the name of the town at the time, but it meant little or nothing to me then. What stayed with me most was his glowing description of a most unusual life he had been privileged to live in faraway Istanbul, on the historical Bosphorus Strait.

Time went on for about thirty years, and so did my life. Kent and I remained in sporadic touch, enough to know where we were each living, I eventually in San Francisco, and he in Halifax, Nova Scotia, where he was now teaching architecture at the state University. Our notes crossed mostly at holiday times, when I was always delighted to receive his beautifully hand-penned one-page greetings on parchment.

Reverting back to Istanbul, I decided to postpone Hagia Sofia to a few days later and, to quell my curiosity, interrupt my sightseeing sequence with a one-day visit to this place reputed to have a fabulous history — Üsküdar. A ferry dropped me at the little dock below the town, and I got out to begin climbing up the hill to do some discovering. Once there, it seemed all estate buildings were tightly secured and heavily guarded by large fences, so there was no opportunity to see anything beyond what I could easily see from the shoreline or through carvings in the gate when I got closer. But I was enchanted, and could not help thinking about Kent the entire time, wondering if by coincidence I had found the place where he once taught. I was almost anxious to get home now and try to reach him in Halifax.

Soon enough, it was time to leave behind unforgettable memories and travel home to San Francisco, where I set about the following day eagerly trying to contact Kent in Halifax. The University of Nova Scotia’s Architecture Department informed me he had retired nearly five years earlier, and then, after listening to my story, decided to give me his telephone number. Fingers shaking with nervous excitement, I dialed the number. A rather formal female voice answered: “Hello, this is the residence of Kent Hurley. How may I help you?”

My heart sank ever so slightly. Somewhat fearful of what else I might hear, I nevertheless said: “I am Erika, a long-ago acquaintance of Kent’s from the Winnipeg years, and I once dated his friend from the symphony. I was just in Istanbul and I remembered Kent telling me about a girls’ school he taught in. I think I may have been right in the very district where he taught but I’m not certain. I wanted to share this excitement with him, and it would also satisfy my curiosity greatly to know for sure.” I could sense the lady listening, but not being so immediately responsive.

“Oh Erika,” she slowly began, “you and I have never met, but my name is Beatrice, and I’m so very sad to tell you, Kent passed away suddenly two days ago!”

I was completely shocked, and needed a few seconds to collect myself mentally. Beatrice then told me everything that had happened. She had known Kent for many years, including all about his amazing life. She was the executor of his estate, she said, and then she asked for my full name and address. “Perhaps I’ll find something in his belongings I think you would enjoy having,” she said. 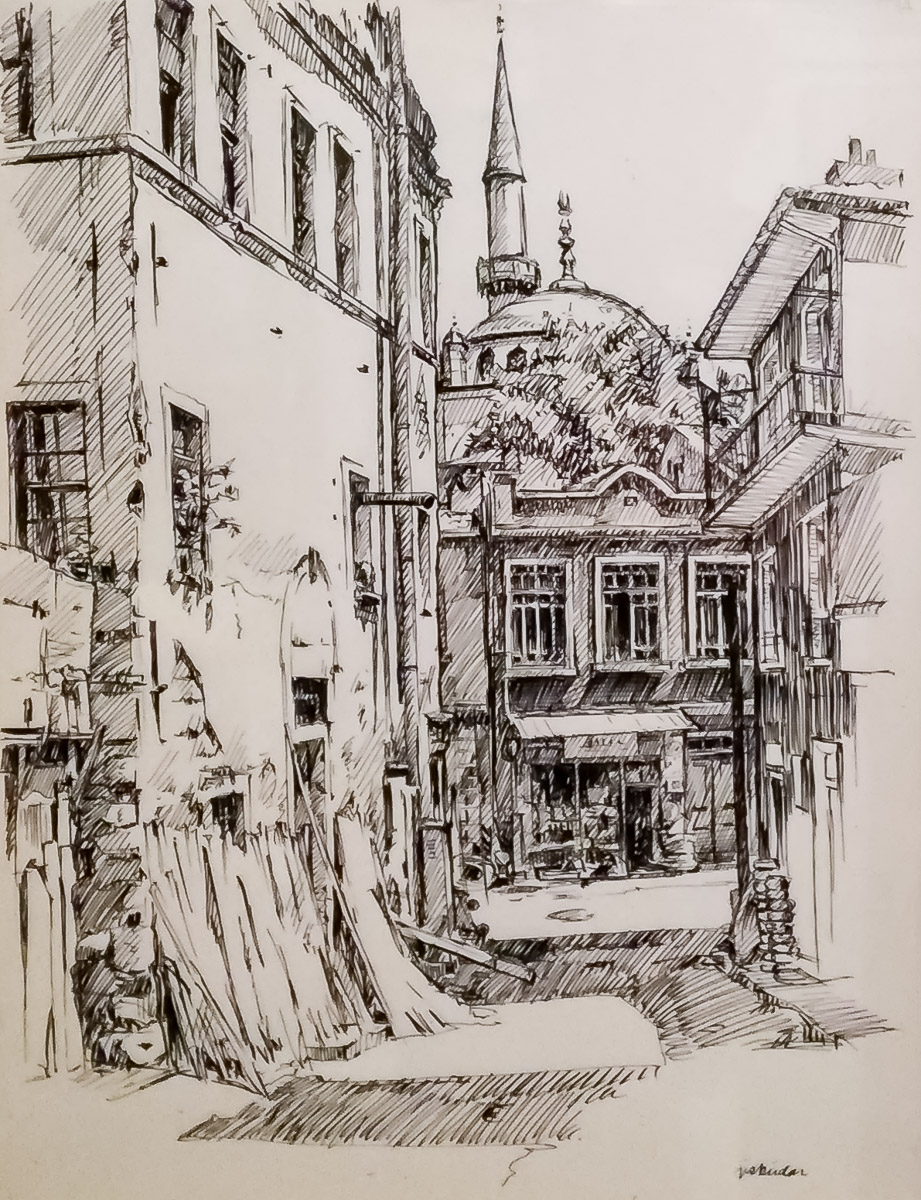 I was stunned, but decided to let this entire thing evolve as it wished. About three months passed and I had more or less forgotten about the whole situation. Then a large package arrived from an address in Canada unfamiliar to me. When I saw that it was from Nova Scotia, I fell limp, and wondered if it might be from Kent’s estate. I opened it, and found inside one of the pencil sketches I had admired years ago in that cluster of three on the wall of his home in Winnipeg. It was that sketch with the cobbled alley leading to the entrance of a very sophisticated building. In the lower right hand corner was the identification: “Üsküdar”. The only clue I had given Beatrice was about Kent’s teaching at a girls’ school. She must have known immediately it was “Üsküdar”. Also included in the package were a few postcards exchanged between Kent and the first horn player whom I had long ago dated.

Here you can find more about Erika’s books.