Always loved the idea of being able to dismiss the Board of a bank, just because they messed up their business? Like a totally irresponsible loan policy, stimulated by almost free money from the European Central Bank?

In Switzerland, this is easily possible. At least at the Raiffeisen Banks, which can be found everywhere throughout the country. Together, these banks form the third largest bank of the country. 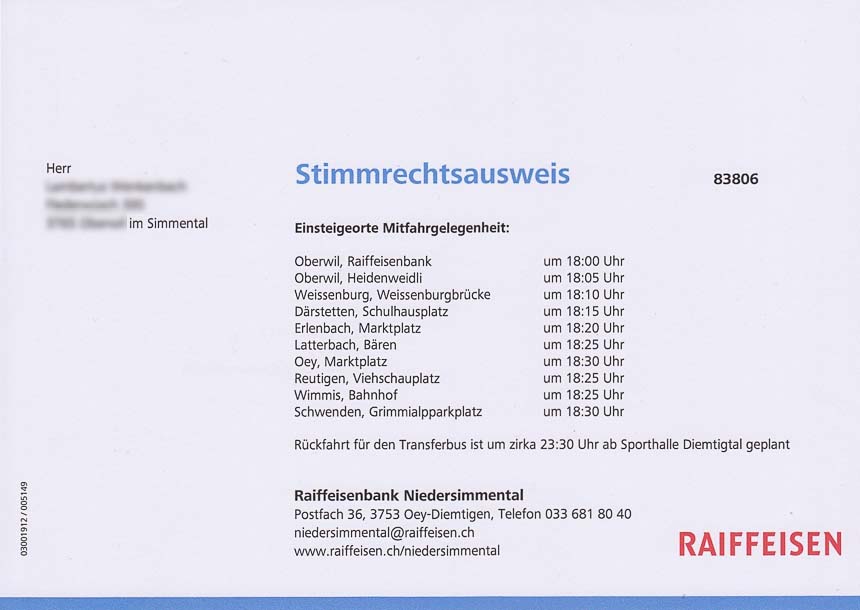 All Raiffeisen Banks are cooperative banks. On the one hand, these banks are saving banks, and on the other hand, they lend money. Primarily as mortgages granted to private persons and as loans for small and medium-sized businesses. The banks have a strong regional focus, so they know the local economy and their customers well. In other words, the bank knows the person or the business that has been granted the loan. And whether it is reasonable to assume that the loan can be repaid. That’s why there are almost no “credit accidents”, the loan write-off is very low. For “our” Raiffeisen bank in 2015 the write-off was only 0,045% of the outstanding loans.

But what makes the Raiffeisen Banks so special is their corporate governance. The Banks are cooperations, and people can only become member of a bank cooperation if they live in the area where the bank is active (or you have to be seen as a local inhabitant, that’s why Sibylle and Bert also could become a member 🙂 ). Every member can buy certificates, actually shares of the bank. These certificates yield 6%. But until 2015, every member was also liable for CHF8000, in case something would go wrong and the bank needed additional capital.

This makes that the members are very involved when it comes to “their bank”. And that’s why they meet every year in a General Assembly, comparable with an annual general meeting of shareholders. This year about 600 of the 5453 members of “our bank” joined the meeting. You can see below, how this looks like. 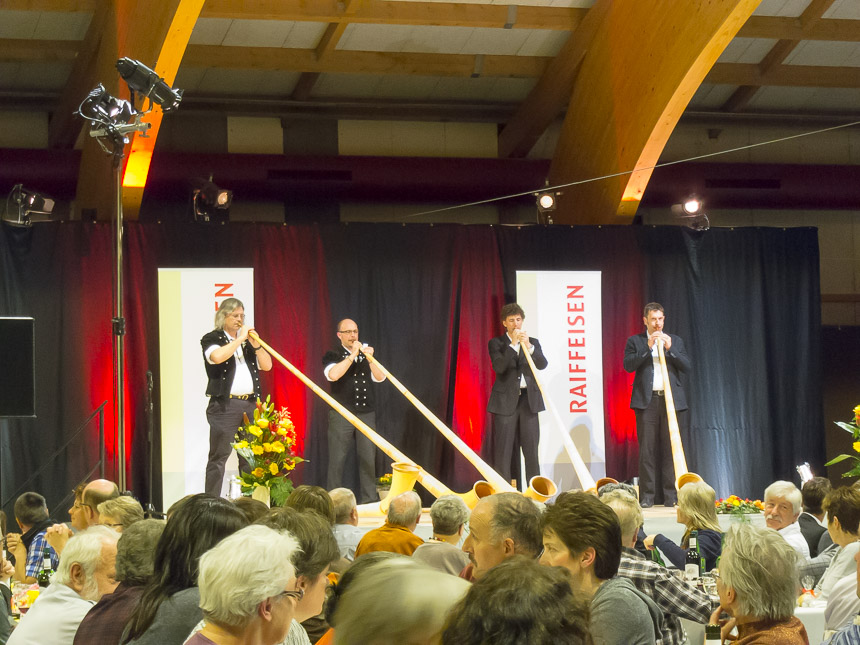 According to the tradition, the assembly starts with a musical performance. This time by a group of Alphorn players. If you want to know how that sounds, please click on the player below.

But after the music it gets serious. The members have elected a supervisory board from among their number. The chairman of this board opens the assembly. During the assembly, the members have to vote several times by hand raising. That’s why the first thing on the agenda is to appoint the women and men who are going to count the votes. Sometimes the outcome of a vote is not clear. In that situation everybody keeps his arm raised, until the vote is counted by one of these women or men. Each of them is responsible for the vote count of a few tables. 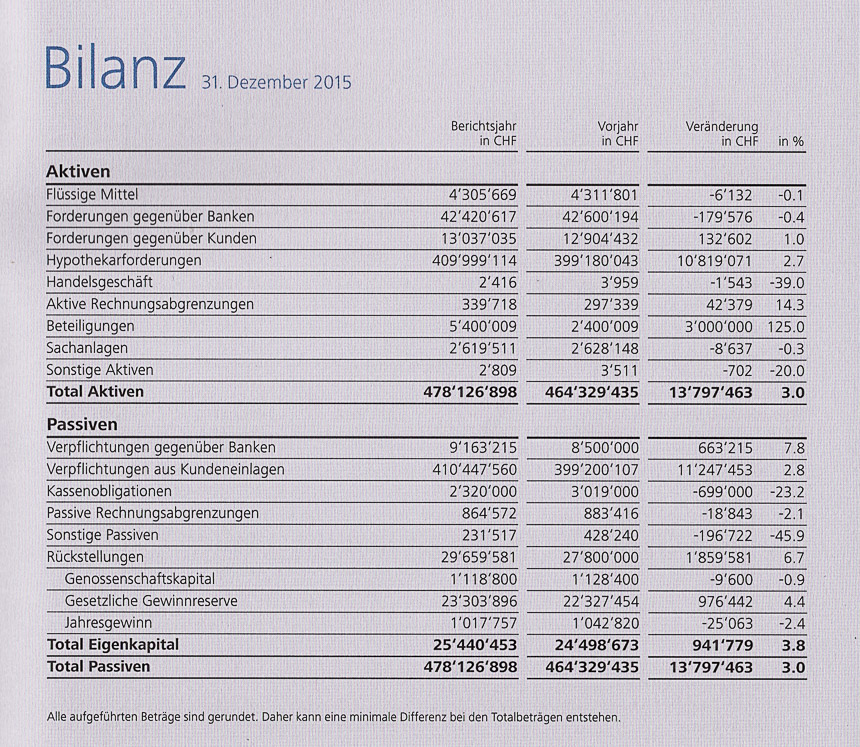 As soon as these women and men are appointed, the assembly continues. The focus is of course on the financial results. These are visible on the balance sheet shown above. As you can see, we are talking about serious money here, a balance total of almost 500 million Franks.

In 2015 the bank had a good business year. It could maintain a stable course in a very turbulent business environment. The net profit amounted to a little bit over 1 million Franks, or about 4% return on equity capital. But more important, this equity capital amounts to 5,3% of the total of outstanding loans. This is a respectable buffer that will make a lot of other banks jealous.

When it comes to the moment of voting, the manager of the bank, sitting left of the chairman, can be confident. He will certainly be rehired. And it is of course a rare event, when a bank manager or the chairman of the supervisory board is dismissed, but it is very well possible. 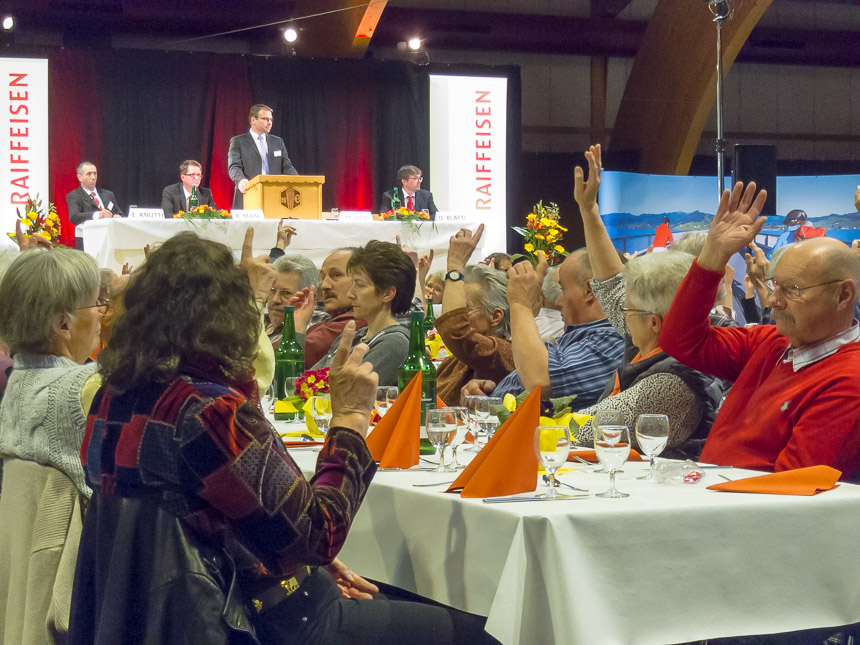 When all banks had such a decent balance sheet and conservative banking policy, the word credit crisis would almost be unknown in our vocabulary. But this decent banking policy is a direct result of influence the members can exert on this policy and on the bank management.

Equity capital that amounts to 5,3% of the total of outstanding loans and a write-off of only 0,045% of these outstanding loans will be music to the ears of many bankers and savers alike. And speaking about music, for those of you who want to hear some more Alphorn music, please click here (not so far from where we are) or here (508 Alphorns in August 2013). And do you want to know how these magnificent instruments are being built, please have a look here.